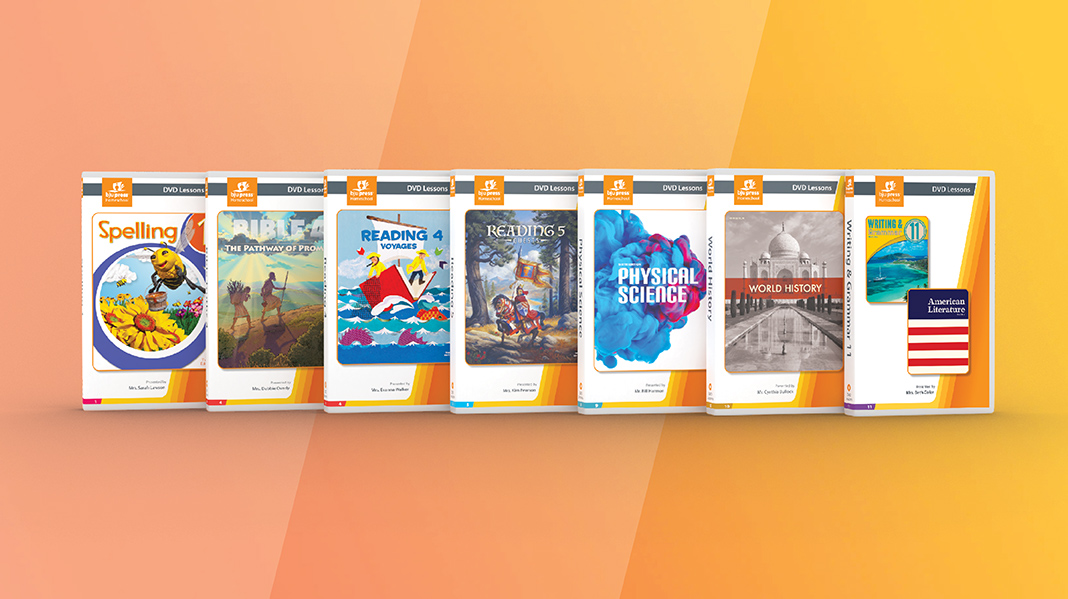 We are excited to introduce our new video courses for 2021! This year we have seven new courses that span from Grades 1–11. Each course is age-appropriate and, above all, is designed to excite a love of learning in your students. For more information about these new courses, see our new 2021 Catalog! END_OF_DOCUMENT_TOKEN_TO_BE_REPLACED (1) the larger story of the world,

(2) the beliefs and values that grow out of that larger story, and

(3) the cultural action or personal behavior that should result from those beliefs and values.

Second, once the purposeful aim for a series of Bible courses has been established, there needs to be a practical method in place for accomplishing that aim of worldview shaping. It’s important to teach children and teens a good process for studying the Bible to ensure that their beliefs and values (ingredient 2) truly grow out of the larger biblical story of the world (ingredient 1) and thus lead to appropriate cultural participation and personal behavior (ingredient 3).

Here’s a simple inductive Bible study method that you can teach your children:

The method can be tailored to multiple age-appropriate learning levels. Each step in the process can be more or less detailed as appropriate.

Example of an Inductive Study

You can use what God said to His people through Isaiah to teach your children a particular value—repentance. But that value will only make sense to your children when they accept the big story of Scripture (Creation, Fall, Redemption) regarding the reality of their condition before God. Only then will that value be personally adopted. Example of how the inductive method can make this passage understandable and practical in terms of a biblical worldview:

Why the Order of the Inductive Method Is Important

Observing what God’s Word says and interpreting what it means must precede the application of its morals to life. If the process is reversed (beginning with application, skipping careful observation and interpretation), then Scripture gets twisted to fit into a preconceived human system of morals. Or the real significance—of relating properly to God in accordance with the larger reality of the world—gets lost. A couple of years ago, my family got involved in a weekly children’s Bible club. We started helping because we wanted an opportunity to serve together as a family and to teach our children how to minister to other people. Since then, Bible club has become much more than a Saturday morning ministry opportunity. We have come to love the dozen or so children that hop on the bus to come every week. We bake them treats. We pray for them. We spend time trying to figure out how to teach them more effectively.

Shortly after we started this ministry, we noticed that some of the girls who came rarely wanted to participate in the organized game time.  In order to better connect with them, we started having a craft time. They love doing crafts, and we’ve found that it’s a great time to teach basic Bible truths and reinforce some of the things my husband is teaching in our Bible lesson time.

This Christmas season, we’re decorating small Christmas trees with a dozen ornaments centered around one theme—the names of Christ. It is our hope that this craft will not only help them understand who Jesus Christ is but that they’ll be able to use it to tell their families about Christ.

You can use this craft in your own ministry setting or even with your own children. Make one ornament every day or make several at once—the pacing is really up to you. But before you make each ornament, take the time to read the associated Scripture passage and talk about the significance of the title. The goal is not just to have pretty ornaments; the goal is to better understand our Savior.

May you find comfort in all that Jesus is this Christmas!

Find other Christmas activities on the BJU Press blog. When the Pilgrims came to America, they left Europe so that they could be the primary influence on their own children. It was a difficult first year, but the Lord provided. As they offered up thanksgiving, other deeply committed Christians who wanted the same opportunity for their children started pilgrimages to North America. Soon other communities popped up in the Massachusetts Bay Colony with the intent of establishing “a city on a hill.” These parents wanted to be governed by God’s law and to train their children to live the same way. It was their desire that future townships could be shining examples of communities committed to serving God.

These Puritan parents and leaders were committed to godly learning. They believed that reading was critical to knowing God through His Word and to following the laws of their townships. So parents took the time to teach their children how to read in spite of the difficulties of frontier life.

However, the commitment to education began to diminish within twenty-five years. Parents were beginning to be negligent in teaching their children reading and Christian doctrine. So in 1642, the Puritan leaders in the Massachusetts Bay Colony gathered to establish a law requiring that parents teach their children to read and “that all masters of families do once a week (at the least) catechize their children . . . in the grounds & principles of Religion.”   [text of Massachusetts Act of 1642]

Five years later, the Puritan leaders gathered again and outlined a plan to provide assistance to parents for the education of their children. They believed that “one chief project of that old deluder, Satan, [was] to keep men from the knowledge of the Scriptures” by preventing children from learning to read. [text of Massachusetts 1647 “Old Deluder, Satan” Act]

So the Puritans provided a teacher for every township with fifty families to help them in teaching their children to read and write. If the township had a hundred families, they made provision for constructing a school building. Parents made a nominal contribution to pay the salaries of the teachers, but they were still responsible for their children’s education. All of this learning was motivated by a desire that children know the Lord through reading His Word.

Imagine what the Puritans would think if they walked through the halls of today’s schools. How would they respond to the discovery that education has been ripped from its intended purpose—service to God? I think the Puritans would do what many Christian parents are doing today and take their children away from the evil influences. After all, they were willing to take their families into the wilderness of Massachusetts to give their children a thoroughly Christian education.

But even after that arduous journey, Puritan parents still faced challenges in providing education for their children. Yet they were willing to make the sacrifices they believed were necessary to ensure their children received that biblical education.

Providing our children with Bible-based education is vital, and BJU Press supports families like yours and mine in making this kind of commitment to Christian education by creating textbooks that present every academic subject and every aspect of life through the lens of what God has to say about it.

Are you ready to make the commitment?